Hannah Kent has written a fictionalised account of a true historical figure in northern Iceland in the 19th Century. She has painstakingly researched the people, the place and the events to take a true framework and build it into a gripping story which humanises a murderess.

Set in Iceland and taking great pains to ensure the language and the accents are as true to history as possible with notes in the beginning about the naming system in Iceland and pronunciation I admit I became a little concerned. Burial Rites is not a novel that has been translated into English, it is written by Adelaide’s own Hannah Kent, and the writing is fluent; not to mention gripping.

From page one we know that Agnes has been tried and sentenced for murder and will face the death penalty, eventually. Until that time she will be held in the custody of families, we don’t hear much about the place she begins her incarceration but after a while she is moved to Kornsa, where she will be held until the day arrives.

Understandably, the family at Kornsa are not thrilled with the idea of having a murderess in their custody for an indeterminate amount of time, civic duty or not. They are offered much needed compensation and the prisoner is theirs to work as they see fit, as long as she remains working with a reverend on her spiritual journey to God before her final moments.

Burial Rites is about so much more than the final months/years of Agnes’ life in custody. It is about Icelandic life; the weather, the poverty, the work and the conditions. It is about learning to look beyond the surface of things. Agnes is not the cold blooded murderess she’s made out to be and time shows her true character.The way this unravels is gripping, and it kept me guessing. There were many occasions that I found myself wanting just one more chapter to see if I could get the answers to my questions. 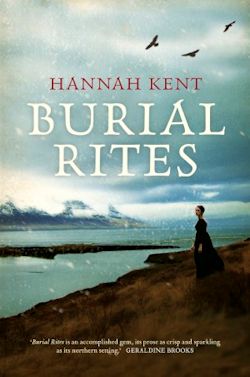 Superstitions abound and much store is set by dreams, add this to the time, the climate and the storytelling (okay so even then it was gossip) of the neighbours and a talented author weaving each of these threads seamlessly into Burial Rites and you are left with a haunting tale sure to remain with you long after the book is closed.

My heart broke at times to think of the situation these characters found themselves in, what parents wants to think of a criminal in such close proximity to their children, even now. How much worse must it have been in a time so rife with superstition where it would have been believed that Agnes’ perceived godlessness would have rubbed off on those around her.

Many of the letters interspersed throughout the book are  translated from original trial records, most of the characters truly existed and the events actually occurred. Years of research have offered Kent a solid framework on which to build a fictionalised yet likely scenario for the way life played out for Agnes.

I found myself drawn to many of the characters and empathising with their plights. They may not always agree with the hands they’ve been dealt but for the most part they just slog on through and make the best of it – because really, what else can you do.

Agnes, I just loved Agnes, my heart broke for her. You could see early on that she had been deeply in love and it seemed to be much too big a leap from the depth of her love to charged with murder, I was desperate to find out what happened. The suspense is drawn out beautifully so that you aren’t sure if you will ever know what actually happened on the night of the murders.

For a debut novel Hannah Kent has certainly got some talent and I can’t wait to see what comes next. This is breath-taking and heart breaking and a brilliant start to Kent’s career.