Mary Beth Keane has chosen a well known historical figure as the central figure of her latest novel, an historical figure whom I feel I should be much more familiar with – history was clearly not my strong point at school, and even now I don’t keep up with what’s going on in the world.

Mary Mallon, also referred to as Typhoid Mary, lived in the early part of the 20th Century in New York after emigrating from Ireland as a teenager. She started her career as a laundress and worked her way up to cooking for some very wealthy families, where she unknowingly spread Typhoid Fever. Apparently her story is quite widely known, unfortunately my history knowledge is limited. Keane has brought her into the limelight and inspired me to want to go and find out Mary’s story, to discover the facts of Mary Mallon’s life.

Keane’s descriptions of New York in the first years of the 20th Century made me wonder how so many people survived. There was garbage and manure piled in the streets and hygiene standards were certainly not what they are today. The fact that there was so much disease is definitely not a surprise, and that is something that Keane takes great pains to point out.

Fever is Mary’s story, there’s no doubt about that. Keane has given us a detailed self-portrait of Mary told in the third person. We get a look inside her mind and her heart. I had to keep reminding myself that this is a fictionalised self-portrait though its meticulous research shines through. It is a very realistic and believable self-portrait and for the majority of the novel I sympathised with Mary completely, there were times that she tested the limits of that sympathy but throughout it all I couldn’t help but feel for her. 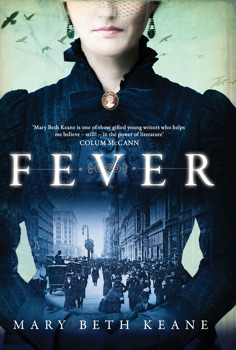 Mary was the first person in America to be identified as a healthy carrier of Typhoid fever so it is more than plausible for an uneducated Irish cook to be unable to grasp the fact that she was passing on a disease she had never had. Having said that, I found that there were passages that I thought were almost hints from much earlier on that may have given some idea – but even so, I am moving to those conclusions from a 21st Century standpoint where we understand a lot more about germs, disease and their spread.

Keane’s writing style is engaging and kept me involved, I wanted to know how this story unfolded – even when I knew something was going to happen that I just didn’t want to read about. Drawn through Keane’s eyes, I don’t think Mary really grasped the extent of her choices as she made them, but hindsight painted things in a different light for her and that’s something we have all had to deal with at times. Hence the old saying, it seemed like a good idea at the time.

This was a very interesting read which involved me enough to want to do some research about the real Mary Mallon. I felt that Keane could have captured the real Mary because she has written her story so well, and in a way that leaves great doubt as to whether any of her actions were undertaken with malice or a clear understanding of the risks at the time she took the action. On reflection at the end of her life we can plainly see her begin to see the entire situation in a different light, but by that time it is way too late.

There is so much in this book that will appeal to more than just the lovers of history, or those interested in the beginnings of sanitation, disease control, New York. I would recommend it to anyone really.

Click to rate this book! [Total: 3 Average: 4.7]Thank you to Beauty and Lace and Head of Zeus for the opportunity to read The French Wife by Diney Costeloe. The book…