Heather Gudenkauf has written a tense and suspenseful drama that centres around the children living in the small Iowan town of Broken Branch.

There is a lot going on in this story even though in real time it spans less than 10hrs; when you take into consideration the reminiscences and flashbacks the time frame grows quite rapidly covering closer to two decades.

One Breath Away deals with a subject that would be quite confronting and emotional for a lot of parents because lets face it, who wants to entertain even a fleeting thought that this could happen to their children – trapped in lockdown in their own school.

Written from 5 different perspectives, some in the first person and others in the third, there is quite a detailed view of what is going on in every aspect of the situation facing the residents of Broken Branch. This multiple point of view is good for filling in the detail but I found it required quite a bit of extra concentration.

The build up of tension is aided by short chapters giving a quick snapshot before moving on to the next scene. My issue with this style is that the scenes were in what seemed to be endless fluctuation, as soon as I got my head around where we were, we were in someone else’s head; add to that the multiple first person perspectives and I spent quite a bit of time trying to work out who I was. The fluctuation did keep you guessing though because it almost seemed that a thought would start to grow and before it could be captured the scene changed, left me open to all suggestions about the identity of the gunman. 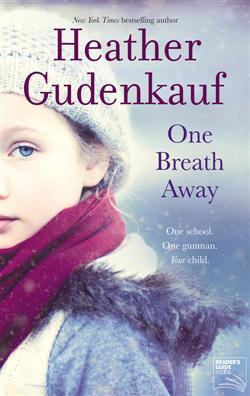 Heather Gudenkauf fleshed the characters out relatively well and we were given quite a lot of back story to completely understand how they ended up in the situation at the school. I was quite put off by the back stories as they were largely made up of the thoughts and reminiscences of the storyteller, which isn’t an issue in itself. The backstory / flashbacks came all of a sudden without warning which made it a little hard for me to follow; one minute I was in the school and the next it was months ago/years ago.

Each of the voices in the book have a unique perspective and relationship with the people, and the town, to show the situation from all sides. Holly is a mother of 2 currently across the country getting well – but not far enough that she doesn’t hear the news, Augie is Holly’s daughter and big sister to P.J. Meg is a Broken Branch police officer with a child in third grade at the school, Mrs Oliver is the third grade teacher with P.J. and Meg’s daughter Maria in her class, and Will Thwaite, grandfather to Augie and P.J.

Meg, Holly and Augie all speak to us in the first person, allowing us into their heads and seeing through their eyes. Mrs Oliver and Will Thwaite are in the third person but still  letting us in their heads which sometimes I found a little hard to keep it all straight.

I did enjoy this book and I was certainly intrigued to uncover the culprit but it didn’t grab me the way I had expected. I was interested and flicking pages like mad to finish this but there were parts I had to work to hold focus because of the jumping between point of views and wandering off into the past with no warning.

One thing, well actually two things, that I found interesting off the media release for the book – much of the inspiration comes for the teachers and students she has met over the years, and a lot of the inspiration for this book comes from Gudenkauf’s near brush with the 1991 Iowa school massacre.

2 thoughts on “One Breath Away”

BOOK CLUB: The Fire of Joy

Click to rate this book! [Total: 2 Average: 4.5]Clive James is one of those Australians who became more famous overseas than here in Australia.  His reputation as a bestselling author, a…