I had a little break in my book club reading so decided it was a perfect opportunity to read the latest by Bronwyn Stuart, an Escape Publishing release coming to e-tailers near you this November. I got mine early on NetGalley because I’m impatient.

She’s The One is a contemporary romance that I raced through a lot quicker than I expected.

I am not a fan of reality TV, in any way shape or form… except I did get suckered into most of Zumbo’s Just Desserts and there were a couple of American rock reality shows years ago that I enjoyed.

She’s The One takes inspiration from The Bachelor, a reality TV show I can honestly say I have never watched a single minute of. The premise of the show is the same but it screens on a rival network. We are taken behind the scenes to see that things aren’t always as spontaneous as they may seem.

There are ulterior motives all over this season of She’s The One and one of the contestants did not go through the same audition process as the rest of the girls.

Millionaire Banjo Grahams signed on for The Bachelor because it seemed like a good idea when he was drunk, a perfect opportunity to make out with a dozen of Australia’s hottest single ladies. In the cold light of sober mornings it seems far from a good idea, he’s not looking for love or commitment and his signed contracts mean that it’s too late to back out.

The only way to keep him from pulling out is to forge a deal with the network boss to rig the show, choosing the winner ahead of time and playing out the show to that conclusion. For this totally unethical plan to work they need to have someone completely trustworthy in the winners shoes and who better than the only daughter of the boss, who is supposed to be producing the show. Eliza is not happy with the proposal but her father manages to sell it in a way that she doesn’t feel she can say no. 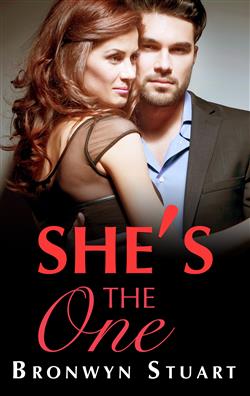 Stuart demonstrates the ease with which a show like this COULD be rigged, I’m not saying they are because I don’t watch them… but it’s not impossible. She also takes us behind the scenes to see what happens when the cameras are switched off.

Eliza knows all about Banjo’s ego, his womanising and his reputation. He is almost better known across the world for his bedroom antics than he is for his sporting prowess and she is turned right off. She’s not looking for a man, she has big plans for her life and her career and she’s just getting to know her dad so a man is not high on her list, defintiely not one as scared of commitment as Banjo.

Banjo is so caught up in the hype and the lifestyle that goes with his sporting career that he doesn’t need a permanent woman, and the only relationship he did try was a disaster so it’s easier to stick with one-night stands with his partners knowing the score from the start.

These two characters are an unlikely match, but sometimes they can be the best type.

The pacing was great, the story was interesting and the slow unraveling of the lead characters was a joy to read. I was invested in getting to know the real Banjo and finding out what made him tick, for such a shallow womaniser he had quite a lot of depth and was very perceptive; following Eliza’s growth throughout the season of She’s The One and the story was also an interesting journey.

Ruthless network bosses aren’t called ruthless lightly and we get a good look at this one in She’s The One, and he was pretty despicable. Ratings are important for a network show because without them the shows will flop but just how far do you go for ratings? What would you risk for those ratings…. sometimes that’s a question best left unanswered.

Thanks Brownyn for another engrossing read, that went way too quick.

She’s The One is book #49 for the Australian Women Writer’s Challenge 2016.

For more information head to Escape Publishing, available through Booktopia and where all good ebooks are sold from November 5th 2016.