Mrs Queen Takes The Train is the debut novel of William Kuhn, a biographer and historian whose work inside the Royal Archives of Windsor Castle and speaking to courtiers inspired this fictional peek into the life of The Queen.

I am not an avid follower of all things Royal so I embarked on this novel with an open mind and no expectations, I wasn’t sure whether it was something that would grab me but I was interested enough to want to give it a go.

It took quite a while for the book to really grab me, the premise is interesting and the behind the scenes look at the fictional life of The Queen is fascinating but it seemed to take forever to get started. There was a lot of back story included for the cast of characters surrounding The Queen and though it is relevant information because it helps us to understand the way in which they interact with one another, it still felt like information I had to wade through. The beginning of the book was bogged down in back story and character building which felt a little too much like work to really engage me.

Once we had a handle on the characters it was a totally different situation. Kuhn gave us an up close and personal look at the lady behind The Queen, an insight into the workings of her mind and the emotional states no-one is allowed to see. 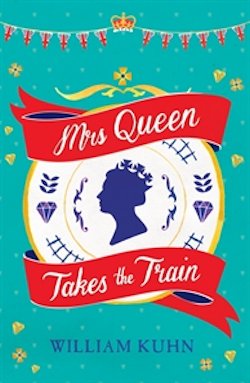 Her entire life has been spent in the public eye and many things have changed through those decades. In recent times The Queen has found herself out of sorts more than she’s used to and on one such day she decides it’s time to pull herself out of it by visiting the places she remembers being happy and sets out to visit the stables; which turns out to be only the beginning of her journey after she finds herself effectively disguised in a borrowed hoodie. I must say it took me a while to get my head around the image of The Queen in a hoodie, regardless of the circumstances.

The Queen’s impromptu and unaccompanied journey sees her in contact with the public in a way that she never has been, it allows her to re-evaluate many things and re-energise herself.

Of course this journey isn’t all about The Queen, how could it be with the monarch AWOL and those who are charged with protecting her desperate to do just that – and ensure that the papers do not get wind of her whereabouts. Following her cross country are Lady Anne, one of her ladies-in-waiting; Luke, an equerry; William, a senior butler and Shirley, The Queen’s dresser. These four unlikely partners are the first to discover The Queen’s whereabouts and set out to find her and bring home. Rajiv and Rebecca are also in hot pursuit. Rebecca was the last person to see The Queen on Palace Grounds when she visited the stables and discussed horses with Rebecca. Rajiv is the first person to have come in contact with the incognito Mrs Queen and recognise her, he takes it upon himself to accompany her to the train rather than leaving her.

Throughout the book we see racial and class attitudes change within the group of characters we focus on. We see unlikely bonds of friendship forged when these characters are placed in situations where they see beyond the station and the role to the person.

The most engaging aspect of the novel is The Queen. Her insecurities, her doubts and the dawning of a new resolve, a connection with the people and a look at life on the outside that she would never have otherwise had.

All in all this was an interesting read that had me wondering how much basis there could be in fact, how many of these characters are actual people and what The Queen would think of her portrayal by Kuhn in this novel. I think all fans and followers of the monarchy would really enjoy this read and I will be sure to recommend it to a couple I can think of.

Click to rate this book! [Total: 0 Average: 0]A selection of our Beauty and Lace club members are reading The Last Truehart by Darry Fraser. Darry took some time out…