I knew this was the second book when I started it and I was a little apprehensive, as I always am when I start a series after the beginning, but I found it stood on its own quite well. I found myself curious about what happened in The Girl In The Steel Corset to lead the characters to The Girl In The Clockwork Collar.

The Steampunk Chronicles focus on the adventure filled lives of Finley Jayne and her ‘straynge band of mysfits‘, a group of extraordinary teens in the steampunk era. Finley is sixteen years old and all of the group are of similar ages, which is something that I had trouble keeping in mind. I was lucky that Cross referred to their ages at different points throughout the story because I never would have thought them to be so young. Even keeping in mind that young people grew up on a totally different timeline in the Victorian era I found it very difficult to think of these characters as teenagers. As I sit here thinking about it (translate: procrastinating) I remember that Romeo and Juliet were 13 and 14 or thereabouts, and I don’t think I ever thought of them as teens either so perhaps it’s just me being very much grounded in more modern views of teens. 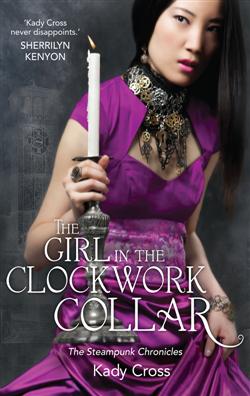 The Girl In The Clockwork Collar is a young adult novel, about teens for teens, and in the Steampunk genre which means that there is lots of extremely cool gadgetry to think about and picture. There are inventions the like of which we have never seen and it astounds me where the steampunk authors come up with some of these innovative steampunk creations.

One of the things I love about steampunk is that it takes a period of history and twists it a little (or a lot) to suit the designs of the author. This is why there are events or people present in the genre who are still quite well known today but it changes them quite distinctly so they can fit in this alternate past created by authors such as Kady Cross.

Yes this is targeted to a young adult demographic but it is going to appeal to a much broader audience, of that I’m sure, and there is something here for everyone.

The novel is steampunk so there are definite strong steampunk elements but there is also a deeply embedded vein of romantic tension thrumming through the story for fans of romance; being a young adult novel and set in Victorian times it is not overt or graphic romance. It is more emotional, it’s the electricity that crackles between our protagonists and what’s left unsaid that Cross has used to convey the romance in this book, and to make us feel it. Cross also speaks to us of getting to know yourself and finding your own acceptance of self, a lesson important for all of us to learn.

Finley Jayne you are a strong and independent young woman who is working hard to get to know yourself and many of us could learn a thing or two from you. I, for one, look forward to reading of your adventures in forthcoming volumes.

One thought on “The Girl In The Clockwork Collar”