Escape Publishing have brought together eight talented Aussie authors for a collaborative series of short stories set in the small Queensland town of Milpinyani Springs.

To this point in the series we have had pretty straightforward tales of love and lust, intense sexual frustrations finally sated. Clarissa is a little different.

Clarissa is a widowed station owner whose private life is suffering the same drought as her parched station. She married her highschool sweetheart and has only ever been with one man, even though they had drifted apart before the accident that left her a widow.

Brandon is the head stockman on the station and Clarissa has been dreaming about him since the day he arrived. Much as she wishes her fantasies could become a reality she has come to terms with the fact that her desires are one sided. This may be set to change with the arrival of Brandon’s friend Adam, the new cattleman she’s just employed to help out around the place. 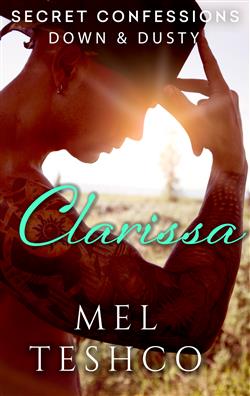 Two hot and hunky cowboys who amp up the sexual tension immediately. Adam is a professed player, he lives on the rodeo circuit and is happy to brag that he rides women as often as he rides bulls. He starts to work his charms on Clarissa and she’s so frustrated that any male attention has her on high alert.

Brandon recognises that he might have some competition and steps up to defend Clarissa’s honour which just makes for a testosterone fuelled game of who can get the goods.

Adam and Brandon are long time friends and over the years they’ve shared a lot of things, they’ve shared pretty much everything and it doesn’t take too long to realise that at some point in this first afternoon they’ve talked about what else they might like to share.

Clarissa has led a pretty sheltered intimate life and the experiences she shared with her husband in her bedroom were pretty run of the mill if Clarissa’s memories are anything to go by. The frustrations that have pent up within her see her ready to be more adventurous and experience all there is on offer.

I would be interested to check in a little further down the track and see how things turned out for Clarissa. There is definite promise for future story fodder in this one and I’m hooked. The scene is set for an impressive sexual awakening for Clarissa but also an emotional awakening for one of the cowboys.

The heat was certainly turned up for this one.

The Secret Confessions: Down & Dusty series can be found at Escape Publishing.
Down & Dusty – Clarissa is available February 2016.

Secret Confessions: Down and Dusty – Clarissa was book #80 for #AWW2015

BOOK CLUB: Ditch the Debt and Get Rich

Click to rate this book! [Total: 2 Average: 5]Ditch the Debt and Get Rich by Effie Zahos is one of the Beauty and Lace book club reads for February. No…