Jennifer Scoullar is back with another novel set in our beautiful country and addressing environmental issues affecting our precious ecosystems.

Billabong Bend is the story of Nina Moore and her love of the Bunyip River which runs along the back of her farm in northern NSW and Billabong Bend, just down river. The river at Billabong Bend is largely untouched and home to many rare creatures. The years of drought have affected everyone and the river is one of the worst sufferers. The floodplains graziers are really feeling the lack of water, and Nina has updated many of her methods to use even less water so that she minimises her impact on the precious marshland of the river.

Alongside the farms of the graziers are the cotton farmers, with very thirsty crops, and it makes relations very tense between neighbours at times. The drought only seems to be worsening, the days are scorching and the water levels in the river are dangerously low.

Star crossed lovers can go one of two ways, it can be very cliched and predictable or an intriguing read where you are always wondering how it’s going to turn out.

Nina is very much a farm girl, she doesn’t get out much and she’s been in a steady and comfortable relationship with Lockie for years. The farm and the wetlands wring more passion from her than the relationship which is now carried out long distance between her and Lockie. She’s not into big parties but she is convinced by friend Kate to attend her high school reunion, which is a masquerade ball. There she meets a masked stranger who elicits a chemical reaction in her body from the first moment.

The masked stranger turns out to be Ric Bonelli, the long absent son of her closest neighbour and her high school sweetheart. The two were never allowed to be friends because there was bad blood between the parents, the Bonelli’s are cotton farmers. They began meeting secretly at the river and became the closest of friends which lead to first love. Until Ric disappeared and broke her heart. 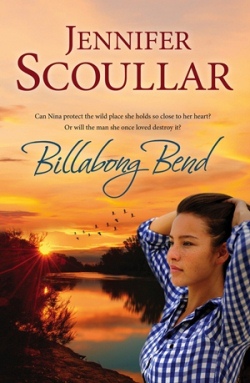 Ric is back in town and moving back to the family farm so the two will be neighbours again. Ric will work with his father and get entrenched back in the life of a cotton farmer – at odds with the natural ecosystems surrounding him.

Nina is changing farming practices to conserve water and is working hard along the river bank to revegetate and retain the health of the land. There is a natural sanctuary down river, home to many rare species and Billabong Bend really does seem to be Nina’s true passion. Ever sine childhood she found sanctuary there and learnt all there was to know about the wildlife from its owner. It seems that the place may soon be on the market and that thought chills Nina to her core. If the property falls into the wrong hands it could spell disaster, and that possibility is looking likely.

Billabong Bend is a sought after piece of real estate that would make for prime cotton growing, at the expense of all the wildlife.

Jennifer Scoullar is an avid conservationist and her love of the land shines through in her writing. Billabong Bend is so beautifully drawn that it is almost a character in its own right as are many of the animals.

The main storyline here is about saving a prime piece of land in a drought starved area that is home to many species dependant on the waterways. It looks at the effects of the dwindling rivers on the wildlife and the farmers whose livelihood depends on the health of the river. It also addresses the water restrictions we in Australia have been living with for years. Living in towns and cities this means shortening showers, not watering the garden as often and children can no longer spend hot summer days outside playing in the sprinkler but for farmers water restrictions have far reaching effects and water allocations are policed, making water licences and usage a business in itself.

Billabong Bend is also a journey of self-discovery for these characters as they face their pasts, assess their passions and work out what really is important.

The characters are well drawn and the setting sings, beautifully written with realistic conflict and many obstacles for the characters as well as great threat to the landscape and wildlife. A book as much about the place as the people, a romance between the characters and the land as much as each other. Another fabulous read by Scoullar that I would recommend to romance lovers.