Watch Over Me is a novel that is disturbing, intriguing and engrossing all at once. It’s set in a time that could well be right now, or a few years in the future. The technology is recognisable if a little more advanced, there is nothing scarily futuristic.

Port Angelsund is a northern city bordering the Arctic sea, it is occupied by Garrison soldiers and controlled by the Guardian. Occupation is not fun for anyone but it isn’t just the Garrison soldiers the citizens need to worry about. The Coalition want to see the end of the occupation and then there’s the Ultra, they want to inspire the citizens to rise up and fight back.

Sylvie Falk is a young woman trying to stay under the radar and survive the occupation. She lives with her mum and younger brother in a storage space behind the cafe they work in. They had a flat in Old Town, before it was bombed.

Watch Over Me is quite an insightful look at war and occupation through the eyes of the common women who are just trying to get by. She has no involvement in the war, except in that she lives in the city and is trying to survive.

Movement through the city requires ID and checkpoints with the eyes of the Garrison always on them. Checkpoints are often used for torture and punishment, largely for the purpose of instilling fear. Sylvie is singled out at a checkpoint one day and when she is rescued by a Garrison lieutenant she begins to think of him constantly, and fall for him without ever seeing his face. 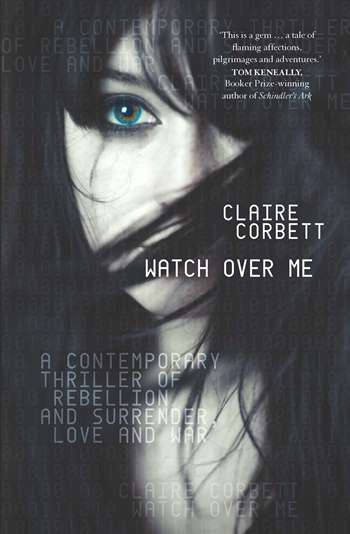 The writing style of this one was interesting, it was written in the first person by Sylvie but it was written conversationally. It was like she was talking to her Garrison lieutenant, or writing to him, but I couldn’t place the how or the when. It was almost like she was talking from a point in the future as she looked back on her life but I couldn’t work out how or when. That element held a lot of suspense for me as I waited to put those pieces of the puzzle together.

Love in a time of war can be an interesting and intense experience for anyone but what if you fall in love with someone from the other side, that takes the affair to a whole new level. It creates suspicion, disgust, contempt and a new level of segregation – from both sides. Corbett explores this indepth to weave a story I found thought-provoking and insightful. It’s a side of war that I had never given much thought to.

Maybe you can call me an ostrich but I try to stay away from the news and current affairs because so much of what is going on in the world just breaks my heart and I can’t understand how these things come to be – so rather than trying to learn about it, I try to avoid knowing about it. Watch Over Me looks at the way each faction thinks they are doing the best thing for the citizens of the Port city and in the end they are all making things worse because their reactions and retaliations escalate issues.

Watch Over Me was thought-provoking and, I think, timely. Life in an occupied city would be uncertain and scary, especially if the occupying forces need to keep changing things so that there is no new normal to get accustomed to. It’s not something I can even imagine being so far from anything similar but it certainly made me think because the times we are living in don’t always seem as certain as they used to, war doesn’t seem as distant as it used to and I’m not sure if that’s a sign of the times or just me becoming more aware of the wider world and looking further afield than my direct surroundings.

There is no shortage of books written about occupied cities, many of them accounts of what people actually faced. What I loved about Watch Over Me is that it utilises modern technology; phones and internet, drones and an eye in the sky all focused on watching their every move and being able to track what’s happening at all times in a way that they weren’t able to do in the world wars.

Watch Over Me is published by Allen & Unwin, you can purchase your copy at iBooks, Booktopia, Angus & Robertson Bookworld, Amazon and where all good books are sold.

Thanks to Allen & Unwin 10 of our Beauty and Lace Club members will be reading Watch Over Me so please be aware there may be spoilers in the comments below. I look forward to hearing what they think.

9 thoughts on “Book Club: Watch Over Me”

Click to rate this book! [Total: 1 Average: 5]Thank you to Beauty and Lace and Head of Zeus for the opportunity to read One Snowy Week in Springhollow by Lucy…