Driftwood is the latest release by Australian author Mandy Magro, it is her fourth novel and the second I have read. Magro is an author passionate about the Australian bush and that shows through her writing, she was born and bred in Far North Queensland where Driftwood is set.

This story is heart-warming as well as heartbreaking and just a little big intriguing. I was hooked from the very beginning and couldn’t wait to see how it all turned out. I think I’m going to find it a little difficult to write a spoilerless review but I am certainly going to try.

There were a few main plotlines running through Driftwood and two timelines. It took a little while for me to get my head around the fact that we were jumping from the 1860s to 2012 in almost alternating chapters and seemingly unrelated characters. It wasn’t long before I worked out how the characters related which made the time jumps a little easier to handle, and I just wanted to keep going so I could see it all come together.Another of the major plotlines was quite predictable and I saw it coming very early on so there was a part of me that just wanted the reveal to come quicker. I put it together so early that I felt it shouldn’t have taken so long for the reveal.

My biggest issue with the story concerns that plotline in that there was such a big lead up to the reveal and then there was nothing following it. We didn’t learn anything about how it was resolved, how it was dealt with or what fallout there may have been. It was almost as if we were left at a cliffhanger moment and then jumped six months into the future for all loose ends to be tied up. I think there would have been a lot of conflict resolution and personal discovery moments in those missing six months that left me a little disappointed for having missed out on. I think the story would have been stronger had we journeyed through those six months with the characters. 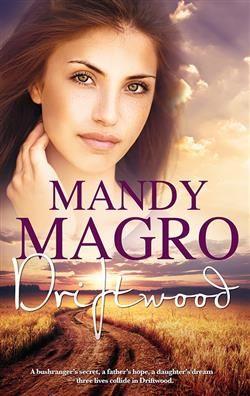 Taylor Whitworth is our present-day heroine, she has just had a major blowup with her parents and taken off to find the life she feels she was destined for. Her mother and stepfather want her to follow in his footsteps and go to uni to gain qualifications and build a career. Taylor wants nothing of the sort, she feels destined for a life on the land – following in the footsteps of the biological father she will never meet. With no real destination in mind Taylor sets off, believing that she’ll know where she’s looking for when she finds it. Late one night on a deserted highway she runs out of fuel and has to hike into the nearest town, until a farmer happens by and drives her into nearby Driftwood where she quickly feels at home and decides to stay.

The wayward farmer is Jay Donnellson, a born and bred cowboy who has had a rough couple of years and is feeling the strain. He is a gorgeous guy, inside and out, though he has built quite the protective wall around his heart. He is struggling to hold onto the farm that’s been in the family for generations, is worried about his grieving mother as they both mourn the loss of his father and he is still recovering from a broken relationship. Jay has a heart of gold and just wants a break, which he may just have found in the appearance of Taylor – if he ever lets down his shields.

Taylor is offered work in the local pub and then also on the Donnellson farm when mustering starts. She just happened into the town that was destined to be her new home, everything seemed to be coming together except the sadness of never getting to know her biological father.

Driftwood is a beautiful tale of small town Australia where everyone knows everyone else, and it doesn’t take long to find out about people when you’re new to town, and the sense of community is palpable. Often you read of the small towns where you may be welcomed but you can’t truly belong until you are generations down the track but Driftwood doesn’t seem to be like this. They are quite happy to embrace you right from the beginning which was lovely to read of.

The story of the past is one of enduring love, of hard work and toiling for your dreams to ensure the legacy you leave your descendants is strong. The love of William and Anne is tangible and beautiful. There is something glorious in a love that is completely unconditional and encompassing. The love where you live and breathe for someone, are willing to die or kill for someone and a love that really does last a lifetime because that isn’t something that happens very often anymore. Much of William and Anne’s legacy is the love of a lifetime.

Driftwood is quite short at only 256 pages but it packs a lot of punch. A story of following your dreams, no matter how unlikely they may seem, and working hard to fulfill them. A story of love and loss, heartbreak and rebirth. A story with a guest appearance by a very down-to-earth and loveable Adam Brand. An appearance that shows him to be a regular, community minded country boy still working on the land. This is a story that I really enjoyed but I did find fell a little short for me because there was a lot of information that was skipped over that I think would have added a lot of depth to the story.

Click to rate this book! [Total: 0 Average: 0]A selection of our Beauty and Lace club members are reading The Last Truehart by Darry Fraser. Darry took some time out…