Today we bring you a little more about another debut Aussie author, Tess Woods. I thought Tess would have some interesting things to tell us because her debut is quite controversial.

I reviewed Love At First Flight and I think the writing was fantastic, but I did have some trouble with the subject matter. The further I get from the reading of the book the more I see the depth of the story, and how much more it was about than just the controversial subject matter.

Hi Tess, welcome to Beauty and Lace and thanks for talking to us.

What made you pursue a writing career?

I had not considered a writing career since I was a teenager, but these characters came to me out of nowhere and they were so loud in my head telling me their stories, that I just had to write about them to stop myself from going insane!

Tell us a little about how you came to be published, I hear it was a bit of a long process?

It most certainly was – it was six long years from first draft to being a published author. I wrote two drafts before calling for help and enlisting more experienced writers to assess my manuscript. Once I worked the manuscript some more with them, I set about finding a literary agent. It took two years and being rejected by every agent in Australia before one agent, Jacinta Di Mase, emailed me out of the blue to say she had changed her mind and still had my manuscript in her head after initially rejecting it and that she would like to represent me. I was delighted! Jacinta then worked with me for a year on the manuscript to get it in tip top shape and then she submitted it on my behalf to the big 5 publishing houses. After nearly a year of waiting, HarperCollins offered me a contract. Then it was time for my editor at HarperCollins to have a crack at the manuscript and then finally, after two more edits, the story was finally ready for publication.

Love at First Flight is your debut, tell us a little about the book?

Love at First Flight is an unconventional love story. It doesn’t follow the typical romance theme and it asks the questions, how far would you go to be with the love of your life? What would you risk? And what if your soul mate is the one who will destroy you?

Mel is living the dream. She’s a successful GP, married to a charming anaesthetist and raising a beautiful family in their plush home in Perth. But when she boards a flight to Melbourne, she meets Matt and her picture perfect Stepford life unravels as she falls in love for the first time ever.

What begins as a flirty conversation between strangers quickly develops into a hot and obsessive affair with disastrous consequences neither Mel nor Matt could have ever seen coming. Mel’s dream life turns into her worst nightmare.

What inspired the story?

I’ve always been inspired by the tragic love story, the story of great love that just can’t be. My favourite book The Bridges of Madison County stayed with me years after reading it and played on my mind. Then I read Twilight and out of nowhere I had to write my own book. Before this I had never entertained the idea of writing. But the longing in Twilight and the knowing that the one you love is the one that is dangerous for you resonated with me and I just had to write about that. So with the themes of desire and danger, I wrote a book about a married mother, because I wanted to write of what I know. I wanted to bring the great love story into the world of the typical suburban mum who is chasing after kids, working and running a home. I wanted her to have that Romeo and Juliet moment. So I wrote ‘Love at First Flight’

The theme of infidelity is not necessarily a popular one, how did you deal with the negative feedback?

At first I cried! I’ve had some very nasty feedback from people whose buttons were pushed by this theme and being a sensitive person, I took the negative comments to heart. But I have developed a thick skin very quickly since getting published and now I think well, each to their own, you can’t please everyone. Most people aren’t nasty anyway, they just either like this kind of story or don’t. And overall, I have had so much amazing feedback too that it has drowned out any negativity. I feel proud that I stood by my story and I took a risk and it has paid off. 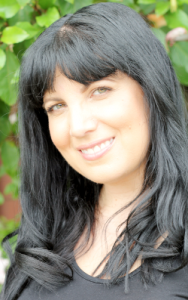 What have you learned from your experience publishing Love at First Flight?

I’ve learned that publication isn’t the end point, it’s the starting point! So much work is needed once a book is published but in my mind I’d thought that once I was published my work was done – ah, WRONG!!

Can you tell us a little about your writing process?

I write late at night once my kids are asleep and all my work is done so that there is nothing distracting me from my story-telling. I write in bed, all tucked in with my hubby sleeping beside me. I often write till two or three in the morning and zombie around at work the next day!

Are you working on something new you can tell us about?

Yes I am! I’m working on a novel called Flat White With One. I’d love to give you a little insight into it. Flat White With One is about Nick Harding, who in Love at First Flight is Mel’s teenage son. Nick is now twenty-two years old, the most popular Australian footballer, a hero to millions of fans across the whole country and a celebrated playboy. But he has a secret powerful enough to destroy his career. Nick is holding onto this secret when he meets Anna Hayati, a young, innocent Egyptian immigrant from a very religious and conservative family in a café where she serves him coffee. (A-ha! The title of the story!) Anna also has deep dark secrets from her tragic past. Together, Nick and Anna fall deeply in love. Anna is anything but the typical footballer’s glamorous-gossip-column-worthy girlfriend and the famous womaniser Nick is not exactly what Anna’s traditional family had in mind for her either. Flat White With One explores what happens with two people who are clearly not meant to be are also meant to be.
I’m very excited to be creating a brand new story and although I have some idea where the story will go, it has already taken some unexpected twists and turns so who knows where it will end up! I’ve fallen madly in love with Nick and Anna and I hope when you read about them next year, you will too!

What advice do you have for aspiring writers?

Write! Just write! There are so many things to distract aspiring writers such as should I build a Facebook profile? Should I blog? Should I do writing courses? Should I enter contests and write short stories first? Should I read books on how to write? I think all you need to do is write. Get your idea down on paper and the rest will come later. Write what speaks to you, what matters to you and deal with all the other stuff after that, none of it is as important as writing your story.

Can you tell us who you love to read and what you’re reading at the moment?

I love contemporary women’s fiction, chick lit, young adult and romance novels. My favourite author ever is Maeve Binchy. At the moment I am reading a romantic time travel book by a debut American author Engy Albasel Neville called A Leap in Time. It’s about a young woman living in LA who buys a painting that transports her to ancient Pompeii. I was drawn to this book because I loved visiting Pompeii last year and the premise of the book fascinated me. So far I’m really enjoying it.

Thanks for your time Tess and we wish you all the best with your writing career.

Love at First Flight can be purchased from Bookworld, Angus & Robertson and where all good ebooks are sold.

BOOK CLUB: It Starts with Us

Click to rate this book! [Total: 1 Average: 5]It Starts with Us, by Colleen Hoover is the much anticipated sequel to It Ends with Us. If you want to read…