Sarah Ayoub is a young journalist and blogger who has worked for some fabulous publications, incluidng: Marie Claire, Cleo, Cosmopolitan, Mamamia, Girlfriend and Frankie. She is also about to release her debut YA novel with Harper Collins on September 1st. We were able to ask her some questions about her novel, writing habits and career.

Hi Sarah, welcome to Beauty and Lace. Thanks for taking the time to talk to us.
Thank you so much for having me!

Do you remember ever wanting to be anything other than a writer?

No, not really. I think I wanted to be a nun for a period of time as a child, but once I saw Lois Lane in Lois & Clark: The New Adventures of Superman, journalism was what called my name. Creative Writing was a natural progression.

What is the first thing you remember having published?

One of those horrible rhyming poems when I was about ten years old, in a Lebanese newspaper. I had returned from a long holiday in Lebanon and written about how I missed it.

Your debut novel ‘Hate Is Such A Strong Word’ is released September 1st. What can you tell us about the book?

HISASW is the coming-of-age tale of Sophie, a 17 year old Australian-Lebanese girl who attends an all-Lebanese Catholic school but is thirsting for the experiences of the outside world. She feels that being in what she sees as an ethnic enclave is doing more damage to the stereotypical perceptions of her community, and the perceptions they have of Australian people. Her story is made all the more complicated by a race-related brawl in her final year of high school, the repercussions it has on her life, and the arrival of the arrogant but smart Shehadie Goldsmith at her school, whose presence makes her question what is worth fighting for, and if she’ll have the guts to do it.

What inspired the story?

I was inspired by the sentiments I felt attending a mono-cultural school at a time when being Lebanese was something of a social burden thanks to the sensationalized reportage of Middle-Eastern crime in the press; and wanting to be a part of the outside world just so I could prove that the people on the front pages of the newspapers were not an accurate representation of my community.

How much of it comes from personal experience?

The story itself is entirely fictional, but I put a lot of myself in Sophie, I think. I felt the way she did about my school – not about my classmates – but about my desire to engage with other cultures and not really having the opportunity to do so, and wondering whether or not that contributed to the social problems I seemed to notice around me. 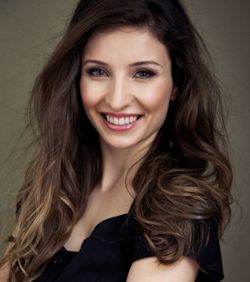 What do you hope readers take away from Hate Is Such A Strong Word?

I’d love it if it made them think about how we perceive otherness, about what it feels like to be torn between two different identities, and how sometimes sensationalised portrayals of groups are not an accurate reflection of entire communities. But mostly I’d love it if they could relate to Sophie, not just as an ethnic, but as a teenager finding her footing in her world.

Can you tell us a little about your journey to publication?

My book took a long time to write because I am not really a clinical ‘sit down and churn out words’ type of writer. I really need to FEEL the story, so I give myself a lot of time. I didn’t write it in order, but when I had the final story, I sent it to my agent and after first draft made some changes – I just needed time away from the story for a while. I polished it off on trains as I trekked around Europe with my husband for six weeks, sent it from a shonky internet café in Lebanon, and came back to Australia with the news I had a book deal. It felt so surreal, but the work didn’t end there. I spent the next six to eight months at various stages of editing and proofing until it came to be what it is now.

What advice do you have for aspiring authors?

Engage with the world you want to be published in. Fiction or non-fiction; YA or Chick-Lit; Fantasy or Literary – whatever it is, network with the right people through attendance at events/launches/signings; tweet and follow the relevant people or groups and sign up to newsletters. Staying in the know is very important. But most of all, write! I’m also going to be a bit self-serving and suggest you follow me on Facebook, as I regularly post advice for writers and tales from book-writing adventures on my blog and share them on my page.

Are you working on anything new you can tell us about?

I’m writing my second YA novel, which is in very early stages at the moment, so my lips are not only sealed, but also a little clueless about where my current story is going. I can tell you that it’s set in a Sydney high school and documents the final year of a bunch of year 12 students and all the drama that comes with it – so there’s no cultural element to it.

What has been your career highlight to date?

Apart from getting my first book published, it would probably be writing about my visit to Coco Chanel’s apartment in Paris. I was privileged to be able to be photographed within the apartment for House & Garden magazine, and to get a private tour from someone specializing in Chanel history – experiences which are not open to the public.

Is there a favourite time or place for you to write?

Nope, it’s totally dependent on when inspiration strikes. I once pulled over on the side of the road and dictated an entire scene of a few hundred words into an app.

What does being a woman mean to you?

Wow, that’s a toughie! To me it’s about embracing my dignity and uniqueness without getting caught up in impossible ideals directed at women. We put so much undue pressure on ourselves. It’s about using my brain, nurturing my soul, respecting my body and harnessing all the blessings in my everyday – social, material, emotional etc – so that I can be my best self and in turn be a gift to my wider environment. It sounds really silly, but by being content and happy, I hope to bring some positivity into my relationships with others.

Thanks for your time Sarah. Good luck with the release of Hate Is Such A Strong Word.

If you want to follow Sarah you can find her here:

Click to rate this book! [Total: 3 Average: 4.7]Thank you to Beauty and Lace and Head of Zeus for the opportunity to read The French Wife by Diney Costeloe. The book…